So I joined a site that has an affiliate link and they give me 5% back for every time someone buys a game through my link. So here is my link : Click me! and they have Overwatch for $55, Legion for 37$, Warhammer for 46$.. Check it out =) I also plan on posting more and getting this site back on track. Okay, thanks for reading my spam :D

Freedom’s just another word for nothing left to lose..

• No Comments
Written on Friday the 13th of February 2015

Course, I have no real need to post that title.. was just listening to Janis Joplin while writing! Let’s see, what has happened since I last posted.  Last weekend I headed to my dad’s to visit with my Grandmother which was a fun visit, we didn’t get home until around 11. My dad’s place is awesome, mostly because it’s hidden in the woods, and not too far from me, about an hour and 10 minutes driving, course it’s on the route to Yosemite, so there are parts that are breathtakingly beautiful, and serene. Sometimes I think we caught up in our day to day lives that we forget how beautiful the world is around us. The concept of “taking a moment to smell the roses” is something that a lot of us are too busy for, but really, take a moment and appreciate that you’re on this planet, your surroundings, and be thankful. That reminds me of a thought I had the other day..

We worry so much about body issues, about what we look like, our clothes, the way we are built, but have you ever stopped to think about what it took for you to be who you are? To even exist? The millions of things that had to happen that combined to create you and how amazing that really is. The grand scheme of things, We have gone further than at one point was ever considered possible, and we are still, growing, learning, and coming together to create. That it’s all rather insignificant if you think about it, the problems that we face, the issues, the worry, the doubt, think about the greater picture.

Regardless, I have some odd thoughts at times. It comes and it goes, I am sure you all have had an epiphany only for it to disappear the next second. It’s humbling, and strange. Erm /Tangent :D

So, spent the last Saturday at my dad’s, and then it seems that I’ve been going non-stop since then. I bought a new monitor and it came in but alas it keeps flashing “No Signal” so thankfully Newegg has offered to RMA it, I just need to get my behind to the post office to send it off, I’m also missing my packaging tape, I have no idea where it’s gone too. It seems that we usually have around 3-4 rolls of the stuff and now it’s all but disappeared.  This whole thing started a few months ago when Walker’s monitor broke, so Charlie offered him his, but then Charlie’s broke, and because I have dual monitors, I gave Walker mine, and I took Charlie’s old one, which was within Warranty, but I tried to contact Hanns-G to replace it, and they ran around the bush until it’s no longer covered under warranty. The people at support were not listening to me either, because the monitor does not have a physical power on button, it’s a touch monitor. So the whole “Hold the power down to reset it for 30 seconds..” does not apply. Which is entirely frustrating.  Hence updating the monitor, which I now have to send back. Bah! Speaking of contacting tech supports. My tablet won’t connect to my PC, it just won’t. No drivers are helping, Asus wasn’t listening to me, and assumes it’s a problem on my end, doing my research it seems to be an issue with a batch of tablets that they sent out. But because mine was a refurbished model when I got it, they won’t be repairing it and the very non-existent support from Asus has stopped responding to me, so there goes my hopes with unlocking it and updating it to Android Lollipop. But, I do like my tablet, it’s big and it’s fun to read on (Which I never thought I’d be saying, it’s fun to read on ..) it just will never be current because Asus has stopped updating the firmware on it, which I know for the people who are not in tech this is a lot of meaningless jargon. It’s a Transformer Pad TF300tl by the way. Which is the ONLY tablet not supported for Hearthstone. UGH!

I’ve also been having extremely strange, and lucid dreams. Which is probably adding to my sleep issues. I’ve not been able to sleep the whole night through in a very long time. I wake up around 4-15 times a night and it sucks, let me tell you!, but it has caused for some very odd, strange, scary, and weird dreams. But not as odd as some of my dreams. I am thinking of making stories out of them…

Moving on..  Now moving from Janis Joplin is a really fun Celtic song –

I think that’s enough ranting for now. Let’s see.. I moved our snake to her new Terrain, which is an awesome 20 gallon tank, and she I hope, is loving it, she’s mostly hidden all day long, which is fine. She’s grown quite big, from the very small Corn Snake I got last year for my birthday, which I was told by the pet store that she was too tiny to feed mice too (Watch me) at about 6 inches, and now she’s about 3 feet long, and on to medium mice. So, then, her old 10 gallon tank got recycled to the new Hermit Crab tank. Which I read up on that they need sand, so I looked online for sand for Hermit Crabs and I found an awesome place selling sand for 25lbs for 14$, awesome I thought, but shipping for that was 40$ and that was an immediate No thank you. So doing some more searching I found that Lowe’s sells play sand 50lbs for 5$ .. so.. I bought it, and now the hermit crabs have a lot of fun sand.. which caused one of them immediately to molt! So, he’s dug himself quite far and from what I understand it’ll take a few weeks.. So.. She had three crabs, two of which are molting which means that they are out of sight for the next month or so. Heh.

Speaking of Brin, she’s made a new friend, which I am having to give people a heads up on. Not that I particularly mind, I think it’s great, but it can be jarring. She’s made a friend with a 17 year old Autistic boy from up the street. Yesterday they were all but matching in jeans, and both had the same color Blue shirt on, and Brin’s blue hair with his Blue headphones. But, they seem to have hit it off quite nice. So, for those that are wondering, he’s got Aspergers and it puts him mentally around the same age as Brin, but physically he’s about the same size as Charlie, and so the heads up part comes in that she’s been telling everyone about her new friend who’s 17.. and since she’s 10 that’s caused a bit of concern with some people. But she’s terribly excited about her friendship “MOM! He’s a BRONY! ” I met his mother and she seems very nice, and so that’s that! Brin is taking after me in a lot of ways and it’s odd to see parts of yourself replicated in someone else.

Oh let’s see.. I also keep taking pictures with my iPod, which there is a reason for it. I am getting a new camera! yay :D It should be here soon, I do have a camera but I can’t stand it, it doesn’t take pictures properly, or maybe I just don’t understand how it works, and I keep attempting to take shots with it, and failing, miserably which has made me stop wanting to take pictures, but I love to take pictures.. so iPod it is :D 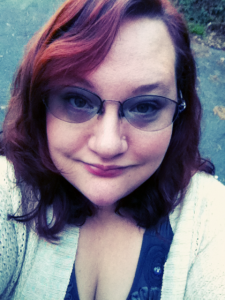 So.. with that I’ll end this rambling post, and see you all next week. By the way, if you have not taken advantage of it yet, go to Eshakti and get a new dress, or skirt, for 40$ off, which means that it’s basically free.. They are awesome, and great quality (and no I am not getting paid for this, just plugging it because it’s a great deal) They make clothes from 14 – 34 in womens I believe, and they will alter the clothing to your specifications, like hem length, cut, sleeve length starting at only 7.50$ – Again if you’ve never had an account there they are having a 40$ off coupon emailed to you when you sign up, and I got a 40$ dress for the cost of shipping.

Janis Joplin – Me and Bobby McGee

The Devil Down Below – Gaelic Storm (Linked)

Due to a 40$ coupon that you can get if you’ve never signed up for the site.. I got this dress for free today.. Rock on! :D

• No Comments
Written on Tuesday the 3rd of February 2015

Edit // If you are privy to my Facebook, Tumblr, or Livejournal – I apologize for the errors while I work out these kinks!

Hi find it slightly ironic that when I finally have the gumption to start working on my website again, my provider flags my IP as a bot because it’s been so long since I’ve worked on my site. Hurrah me! Regardless, hello!

I hope everyone has had a good weekend. Mine was busy, and long, but mostly busy! Course my life is mostly busy, all of the time! However I did manage to finish reading “Outlander” by Diana Gabaldon . It was .. interesting. About halfway through she loses her focus in the book and it’s mostly about sex and violence but then 200 or so pages later, she regains focus and it turns into a pretty good story, with a lot of sex and violence. Which I guess is why the TV show based on the series is behind a cable station and not public access.

I also made some Sims 4 paintings – However, they are not “my” paintings, but mostly free-access images. Upon trying to upload them to Mod the Sims, it was stressed to me that I should make my own artwork, so I spent last night doing that, while watching “Nightcrawler”. The movie itself was interesting, but bland, it reminded me a lot of the movie Driver, which also was very good but the end denouement was lacking. I am not quite sure what I gained by watching it, but for entertainment values it was.. decent. Dark, gritty, and completely exploits the morbid curiosity that we all have within us, and the main character is a complete and utter sociopath.

Now, let’s see if I remember how to add an image gallery.. 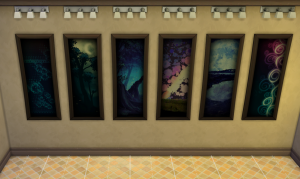 Original Paintings for your Sims 4 game, it uses the Long Jazz style, so they are quite large.
Download here.
Install into your \Documents\Electronic Arts\The Sims 4\Mods folder and Enjoy!

Let’s see if this works.. mmm Hello.. Hi.. If this works, then be prepared =) For updates about Sims 4, World of Warcraft, Cooking, Sewing, Reading.. various other games.. So wish me luck, I’ll do my best to actually update.. :D

A
bout me, my name is Kimberly. I am 32, a mom to three. I work for Pullipstyle on occasion, I freelance web-design among other things. I enjoy listening to music. I love to read, and I do write sometimes as well. I am an Aries, I live in the high Sierra-Nevada mountains of California.